What the ASP could learn from the Gotham city duel

Ok for years and years professional surfing has been desperate to tap into the inland market as they see it as the untapped potential for hidden riches and god knows what else.

They think if we could turn on the whole world on to surfing 3 fat people who don’t surf will get rich beyond there dreams and spent the rest of their years drinking taking drugs and spending the money on hookers. While the rest of us will wallow amongst the masses of kooks and praise the brains behind the not so brilliant idea that everyone should take up surfing. The TV rights can be given to some low-grade network and we can listen what dorky commentators say to convince us to sit on our ass all day watching 3 ft Trestles. So the powers that be have struggled to come up with a format for surfing that is entertaining to the mid west and will have them coming back for more.

Well back in 1967 they came up with the perfect formula in the episode of Batman where he has the surf off with The Joker at Gotham point.It was fun and ridiculous and entertaining and they both wore great custom outfits that made them easy to distinguish. Now this was the really fun-loving joker Cesar Romero not the sinister dark Heath Ledger variety,you remember purple suit, green shorts, green hair ,green board splendid combination. Then you got the Batman on his yellow board he surfed in his cape and kept his boots on and wore his shorts incredibly high,they were held up by the bat utility belt these are the sort of things people want to see, like what gadgets does John John have in his Hurley internationals nothing I bet how boring.

So their on the beach GOOD verse EVIL so whats at stake, chaos and anarchy on the streets and maybe a good time if The Joker comes out ahead, or law and order up held and the good people of the world saved so they can continue to work 10 hour days and enjoy 25 yr mortgages and weekend trips to the mall. As you can see it was nail-biting and had everyone on the edge of there sofa at home this was important shit about to happen on TV. 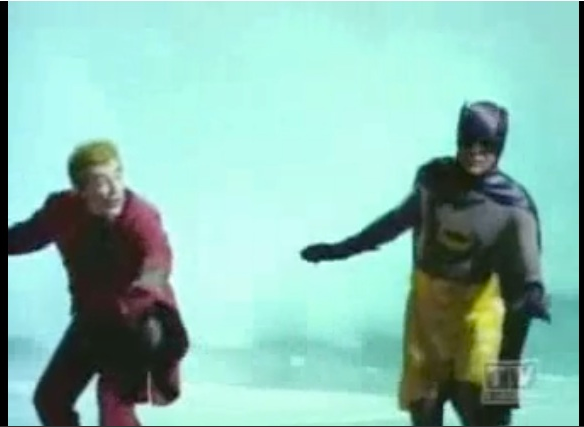 Well as we all know The Joker ripped all over The Bat and got well and truly ripped off and was pissed with the final decision by the judges. The Batman won on a technicality due to a shark interfering and having some maze on hand to take control of the situation. It was great it was entertainment and lasted 2 and a half minutes which is about right amount to time to keep a non surfers interested. The inland masses think of the beach as a good time and chicks in bikinis and beer, unless they ASP want to throw in nudity or bikini girls  and sharks which they are loathed to do the masses will consider it a boring activity.

So that’s it keep it short, keep it entertaining, have goodies and baddies, dress them up so they are easy to identify add sharks to the mix for a little more suspense and you got yourself a surf contest worth watching. Then the audience can go back to reruns of Baywatch like they were doing before the were so rudely interrupted.

Sometimes all you got are knee high waves. 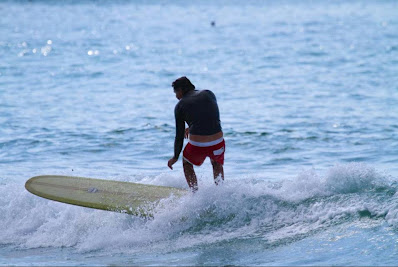 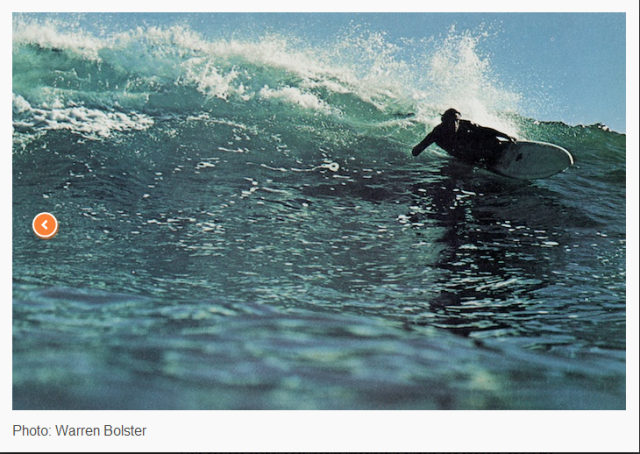 Classic shot of a favourite break. 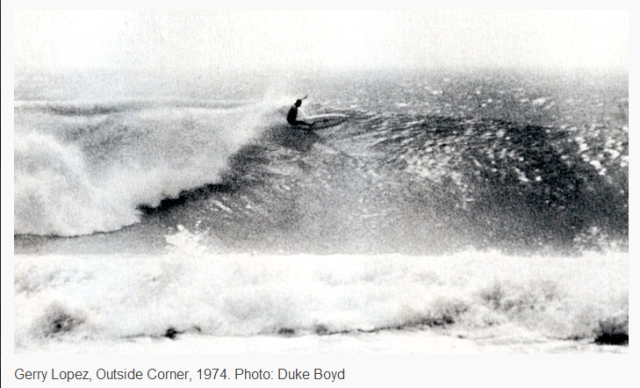 I once some years back bought an old skateboard DVD called ‘Spinning Wheels’ which had great 70s skate footage from the Californian scene of that time period, showed what else was going on apart from the Dogtown gig. But the thing that surprised me was tacked on the end of this movie was all this great footage of Lopez and Russell surfing beautiful empty Uluwatu alone in 74. If you have a connection with this part of the world it is definitely something to look out for, you wont be disappointed.

The only cool is on the beach not the bleaches.

I think it was earlier this week I was getting something eat who knows where but I was flicking through the newspaper hoping to see something interesting. I obviously didn’t as I made it all the way the business section and there is another article on Billabong and it’s troubles. There are a couple of Spainish twins who work at this cafe and they are always smiling and happy so I don’t mind hanging around. So read all about Billabong and I try not to be cynical and just read the article about how they got this new Chief called Neil Fiske, and how he has done great things else where and hope to do the same for Billabong. Marta the hot Spanish waitress asks if I would like another cup of coffee which I don’t and I say’ Yes that would be great’ she smiles I am a sucka for that shit, to hell with it I keep reading. 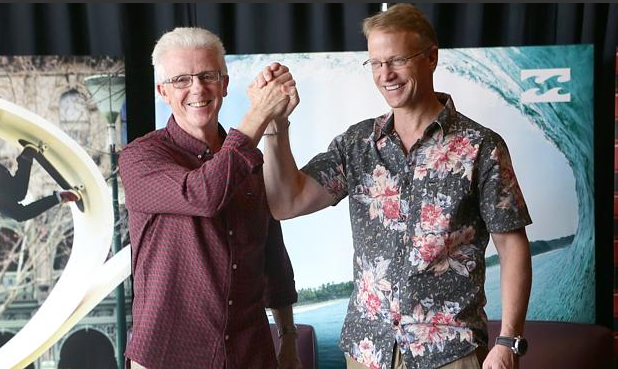 So to cut the crap the Neil the new top dog is telling all the press and investors at the Sofitel Broadbeach where are going to make this company cool again with the youngings. We are going to make a heap of money off them and that 860 million we lost last year you wont even notice it. Now we all know nothing about Billlabong is cool and hasn’t been since Dwayne Harris sported a pair red and yellow shorts in 1980. The Sofitel rings alarm bells already as to the non understanding of what the kids dig, anyway lets move on with the story, and how they are going to do this is invest more heavily in digital media, the kids love this and the old investor don’t understand this so its good business, what do I know.

Ok so here we are Sunday morning arrives drizzly rain no waves bit of an indoor kind of day and everywhere I go people are talking about watching the Billabong Pipe masters on live streaming, I have never really done this before but the surf in Hawaii was pumping so I sat and watched it like it seemed half the population of the world was doing. Now I am thinking Billabong has a huge captive audience here with Pipeline, World title on the line Slater and Fanning neck and neck, perfect scenario to keep the punters happy.

Now this is where it all falls apart in my eyes, these days Pro surfing is a pretty daggy thing, I tried to view it in the eyes of a young person say pretend I was 16 years old again. Hawaii looks awesome, waves big and scary thats all good, but nearly everything else is run by old guys, the commentators all look craggy or bald or wearing stupid trucker hats. The shots they pan over the contestants area seems full of scruffy hangers-on and mates of the local sales rep. All the competitors are still wearing hopelessly out of date boardshorts. The only fun to be had seemed to be the body surfers who were riding the inside waves unhindered, and some cute girls on the beach.

What I am saying is Billabong just missed a very big chance to show they are going to be different in the near future. But it was just the same as it ever was, you have to reignite the dream of these kids with how good would it be to be hanging there on the tour. But you gotta get rid of the old fat guys and add some razzle dazzle on the shore, Pipe is spectacular but between waves there is just banter its a tired formula. People obviously love to watch these live streams but while you have them in you grasp you got to be entertaining them and sell them a dream.

The only chance they have is that auntie Margret will go into the local surfshop and buy nephew Andrew a pair big bright patterned Billabongs for Xmas like she always does and he will thank her and put them in the bottom draw and they will never be worn like every year.

A good wife is hard find, John Severson got lucky. 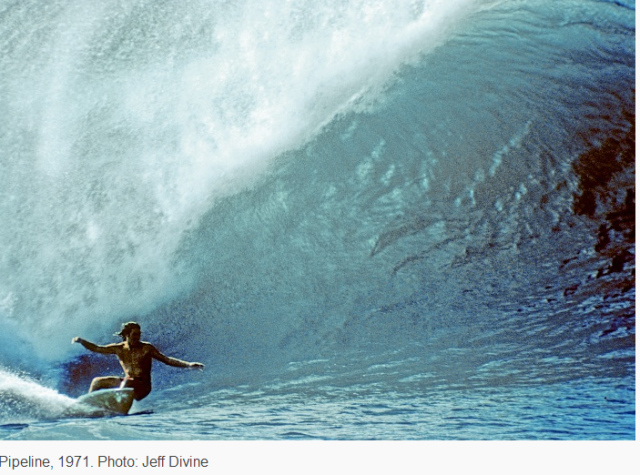 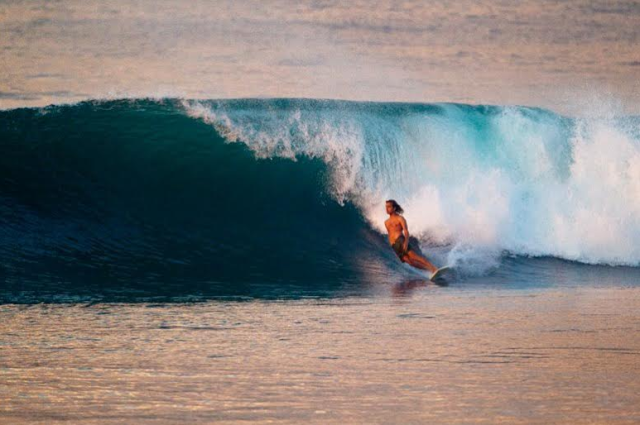 A couple of sequences from an August session. 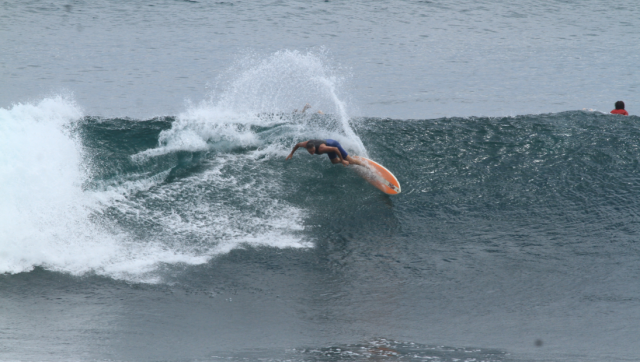 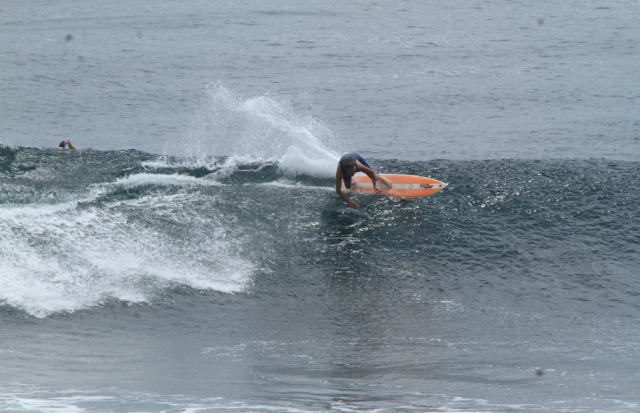